Posted at 14:16h in News by gina warren
Share

“December and January’s temperatures dipped to the teens and single digits, and the result is much higher electric bills than expected,” says Duck River Electric Membership Corporation (DREMC) CEO and President Michael Watson.

“In addition to the extreme cold weather, other factors that contribute to one’s electric bill include the type of heating you use, how well insulated your home is, how many square feet you heat and what your thermostat is set on,” adds Watson. “It is also important to consider the timeframe reflected on the monthly bill. These all play a part in how many kilowatt hours we use and which billing period is on our bill.”

Watson adds that other things like lighting, household appliances and water heating also contribute, but heating and cooling our homes accounts for approximately 30 to 40 percent of our overall average electric use each month. “When we experience such low temperatures like recently, the cost of heating our homes can be even greater.”

According to Mike Bayne, DREMC Shelbyville district manager, cooperative members are seeing a drastic increase in electric bills that reflect the extreme cold temperatures. “It has not been uncommon to speak to a Duck River Electric member, who lives in an all-electric home, whose electric bill was $300 in December and is $700 this month,” states Bayne. “In fact, my own electric bill increased from $145 last month to $254, and we kept our thermostat set at 63 degrees to help avoid even higher electric use. Regardless of our efforts to conserve energy, this is still a 75 percent increase from one month to the next, and our members are seeing much of the same.”

“Not only will those with all-electric heating notice increased costs for heating,” adds Watson, “but those with other forms of heating may also see bill amounts increase as a result of the frigid weather in recent weeks.”

Watson explains that in comparing temperatures of the first 25 days of Jan. 2017 to that of Jan. 2018, daily lows averaged 42 degrees last year; in 2018 the daily low temps have averaged 25 degrees. From Jan. 1 to Jan. 25, DREMC had logged a total of 18 days where low temps were at 32 degrees (the freezing mark) or below, with three of those days dipping into the single digits. As compared to this same period last year, only six days reached freezing or below.

“While January so far has averaged 25 degrees, the entire month of December 2017 averaged about 32 degrees,” he adds. “Two separate stretches of 10 days and eight days in December held consecutive temperatures at or below freezing and had an impact on all of our bills; yet January has been even colder, and the winter isn’t over.”

The Tennessee Valley Authority (TVA), which provides electricity to DREMC, twice initiated a “voluntary curtailment of energy use” across its seven-state region to help control energy demand during the worst of the low temperatures recorded on Jan. 3 and Jan. 17. According to TVA officials, on Jan. 17 when low temperatures plummeted to 5 degrees, TVA reached an all-time daily energy record of 706 gigawatts sold valley wide.

On Jan. 18, DREMC’s peak load reached 533.9 megawatts (MW), which was more than 100 MW higher than the Dec. 2017 recorded peak demand. On Jan. 25, as normal temperatures returned, DREMC had logged 377 MW for daily demand. According to co-op officials, the average hourly demand for the DREMC area is between 200 to 300 MW.

In monitoring weather predictions and calculating peak load, DREMC activated its Beat the Peak™ Alerts four times over the last two months asking members to reduce energy use to help avoid higher energy costs associated with TVA’s peak demand and its accompanying demand rates. Conserving energy use during the winter peak hours is helpful in avoiding higher energy rates charged by TVA to DREMC who must then pass those rates on to its members.

“When cold weather strikes in spurts as it tends to do in our area, it can be easy by month’s end to forget the days we spent huddled indoors with the heat and lights on, computers and smartphones charging, and the television or game systems turned on for hours of entertainment during those times when the family would have otherwise been in school or at work,” adds Bayne. “By the time electric meters are read and bills are generated and mailed, the frigid weather may be forgotten as milder temperatures return making it harder to understand why our bills are higher than we expected.”

“Although many factors contribute to our total monthly electric use, extreme temperatures and how we heat our homes are what contributes most,” states Watson. “The bottom line is that electric bills on average will be significantly higher this month as a direct effect of the recent cold weather. Higher-than-expected electric bills can place hardships on some, so please remember that DREMC offers several ways to assist our members, such as Project Help, and there are agencies in our local communities that can help with bill payments. Remember also that it is important to contact us before your bill is due, and speak with a Member Service Representative about your options.”

DREMC offers helpful energy-savings tips and payment plans to assist its members in controlling monthly electric bills. Call your local DREMC office for details. Brochures and information are also available at co-op offices and on our website.

The charts above illustrate how much colder this January has been than 2017.  Two stretches of frigid temperatures well below 30 degrees affect heating costs and drive up electric and gas heating bills.  Heating and cooling systems are large energy consumers, accounting for 30-40% of a household’s overall average electric use each month. 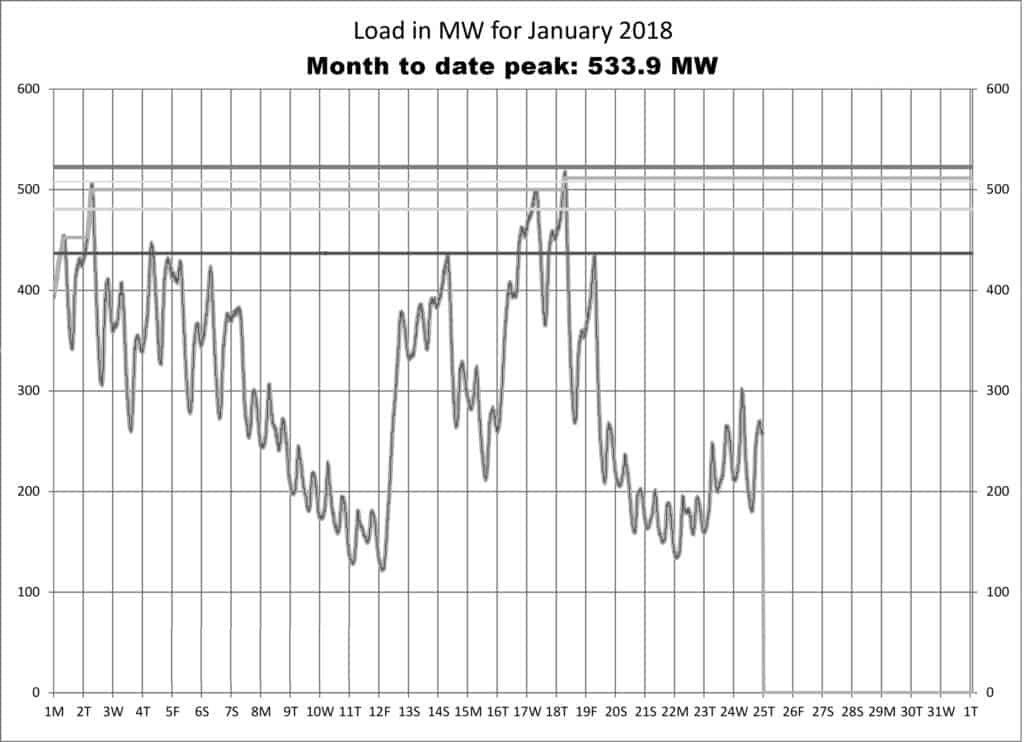 The chart here illustrates DREMC’s peak electric load, which occurred on 1/18/2018 when the temperature hit a low of 4 degrees.