Make a Difference. Be a Co-op Voter!

Duck River Electric Membership Corporation has been named a “5-Star Co-op” by the National Rural Electric Cooperative Association (NRECA).  The 5-star designation recognizes DREMC’s high level of participation in Co-ops Vote, a national get-out-the-vote campaign. The campaign is a non-partisan effort that seeks to boost voter turnout in areas served by electric co-ops all across the country.

Electric cooperatives play a unique and special role as a voice in their communities. This level of strong engagement is evident in the conversation DREMC has created around the opportunity to vote. Elections are important, especially in rural areas, and DREMC has used the Co-ops Vote program to increase awareness of our civic duty on every Election Day.

The 5-Star Co-op status marks the highest level of engagement in Co-ops Vote and is achieved when a participating electric co-op completes at least five activities under the program.

More information on Co-ops Vote is available at www.vote.coop, where you can register to vote and find a variety of voter resources, including information on the candidates, election dates, voting locations and brief descriptions of key co-op issues.

NRECA is the service organization that represents the nation’s more than 900 private, not-for-profit, consumer-owned electric cooperatives. With 42 million members in 47 states, electric co-ops can stand together as a powerful voice in this year’s elections. 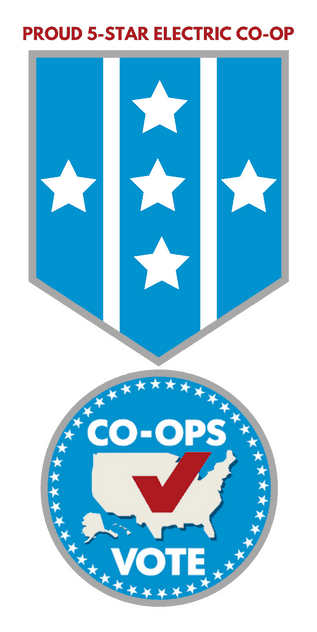