Duck River Electric strives to deliver on our promise of providing safe, reliable electric service at the lowest possible cost. Throughout the spotlight series, The People Who Power DREMC, we have introduced several teams. Many greet you upon visiting the offices, some design new electrical construction, and others work to keep the lights on. It is our pleasure to introduce DREMC’s system operators and system service representatives who have different responsibilities during an average day, but when outages occur, they are laser-focused on communicating with members and team members in the field.

The DREMC system operations center (better known as SysOps) is in the hands of eight operators, Andy Barnard, William Fly, Katie Forsythe, CorrieAnn Hickerson, Jason Jones, Colton Melson, Caleb Parker and Frankie Williams. The SysOps team is led by Doug Simpson, system operations supervisor, who has been with DREMC for 20 years and understands the sophistication of the cooperative’s electric system.

Surrounded by large, wall-mounted and desktop computer monitors, system operators have their hands on the pulse of DREMC’s electric grid via the SCADA system, the Supervisory Control and Data Acquisition. Through the networking of fiber technology along with SCADA, AMI metering and the outage management system, the team can check voltage levels measured by devices installed across DREMC’s service area and remotely control the opening and closing of electric circuits to aid in routine line maintenance and during outage restoration. This team also monitors weather conditions, as severe weather and extreme temperatures have the potential to impact system reliability.

“The SysOps team has a unique perspective in becoming familiar with the newest technologies in which Duck River Electric has invested for daily operations,” said Simpson.

“The technology we use detects power blinks and outages so quickly that we know an outage or fault is occurring before members can call to report the problem,” said Fly.

“The SysOps team and the technology used today helps to pinpoint outages and possible problems with voltage,” says Katie Forsythe, system operator. “Sometimes an outage affects thousands, and at other times, it may only affect five members. In either case, the technology and applications we use are vital to the efforts made to quickly restore power.”

DREMC’s electric system and SCADA controls are designed to isolate the location of the outage, and through calculated studies and an understanding of how electric circuits are fed, damage to the electric equipment and lines can be isolated more quickly to assist line crews with more quickly making repairs to restore power to members. SCADA controls with fiber connection aid system operators with transferring electric load through a sophisticated process that enables them to reroute power using an alternative electric feed to restore electricity more quickly to all but those members who are near the damage caused to the lines. At times, the ability to pinpoint and isolate outages helps line crews avoid the tedious task of “riding out” miles of electric lines looking for the physical damage that caused the outage.

“The installation of DREMC’s fiber loop created many opportunities for SCADA to assist with shortening outage restoration times, helping crews with remote orders and isolating faults beyond devices installed in the field,” said Simpson. “The real-time metering data of these devices has been instrumental in expanding load transfer switching capabilities that enable Duck River to restore power to large sections of the service area quickly.”

“In addition, the AMI technology has become an extension of the SCADA system,” he adds. Remote meter communication is used daily for managing DREMC’s pre-pay metering program and for remotely performing meter connects and disconnects from the office.

“No one wants to be in the dark,” adds Fly, “and when members call to report an outage, they mostly want to know what caused the outage and when will power be restored.”

“We see everything through from beginning to the end of an outage,” says Forsythe. “When members call to report outages after regular office hours, we answer their calls, run reports, check voltage loads, notify the crew on call and monitor the progress from the system operations center until the power is restored.”

Forsythe shares that during major power outages, everyone – members and employees alike – want the power restored quickly. “But when outages are so widespread, the faster we work, the more likely we are to make a mistake. And mistakes in our jobs can cause someone to get hurt.”

“At times, our phones can be ringing nonstop during a large outage,” adds Hickerson. “When coordinating our responses to large outages, especially those that involve TVA, it’s important to focus on communicating with the crew, supervisors and fellow operators to make sure nothing is missed. Focusing on outage communication keeps the crews safe when energizing lines in the field and remotely using SCADA.”

“What I love most about this job is that I get to work with all employees and many of our members depending on what the day brings,” adds Fly.

Jason Jones and Colton Melson joined the team in January. Part of their job training included ride-along opportunities with members of DREMC’s line crew, which helped them learn about the electric system and understand how outages are restored. “This type of on-the-job training gave us a better understanding of the crew’s work and the time it takes to replace poles and electric lines that are damaged by severe weather,” said Jones.

Melson knows that the duties of a system operator are “a lot to take in,” as he describes. “It gets chaotic when thunderstorms hit, and outages begin populating on the SCADA map as they occur while the storm moves across our service area.”

Caleb Parker has worked as a system operator for three years after finishing the industrial maintenance program at the Tennessee College of Applied Technology located next door to DREMC. “I had learned about electricity, but not on this scale,” Parker states. “During outages caused by major storms, we all put in a lot of long hours to make sure everyone has electricity.”

Barnard, who works the night shift, describes SysOps as a 24/7/365 centralized hub for every DREMC office and almost every aspect of the system.

“When working the night shift, you’re usually among the few DREMC employees awake at that time, which requires us to be especially diligent and decisive when system anomalies arise,” said Barnard. “DREMC personnel, both in the field and in SysOps, are the most professional and courteous bunch I have ever worked with, and it’s an honor and pleasure to serve our members alongside them every day and night.”

When members call the office, System Service Representatives Aleta Rutledge, Taylor Shasteen and Jennifer Locker (referred to as SSRs) are perhaps the voices that greet you during the hours of 7 a.m. until 6 p.m. on weekdays.

SSRs work primarily behind the scenes but are a key part of caring for DREMC members. The SSR station is located in the System Operations Center, and they are responsible for answering the lion’s share of incoming phone calls and responding to emails that are received through DREMC’s website and mobile app on a daily basis.

During the week, DREMC receives as many as 3,000 incoming calls that are answered by the SSRs and the member service representatives (MSR) at the cooperative’s eight offices.

Prior to becoming SSRs, Rutledge joined DREMC in 2010 as an MSRs at the Decherd DREMC office and assisted with initiating requests for new electrical construction for the field engineers and assisted members with the state electrical permit process. Shasteen previously worked as a customer service representative for a water utility in Maury County. Their experience and training have been an asset in their current roles.

“It’s important for our members to know that someone is here, at the office, when they call,” said Shasteen. “Talking to a person during regular office hours rather than an automated voice or computer gives DREMC members assurance that we are listening and ready to assist them.”

To continue assisting members when they call DREMC after regular hours, they are greeted by the cooperative’s auto-attendant phone system. Although this system is an interactive voice response option, it continues to offer members the ability to make payments, report outages and retrieve information about their electric accounts without the direct assistance of a DREMC team member.

For convenience, DREMC offers online options for signing up for programs and requesting services, but some members prefer assistance by phone.

SSRs assist members with questions about their bills, whether they are calling about a due date or making a payment over the phone. Other calls include outage reports, service connects and disconnects, and more. The role of an SSR requires them to retrieve and analyze data from DREMC’s metering, mapping, outage management and the member account database to be able to assist members.

“When a member calls to report an outage, we can verify the loss of power to the electric meter by ‘pinging’ the meter remotely through computer software,” adds Rutledge. “We then receive confirmation that the meter either does or does not have power. This type of technology wasn’t available to us until recent years, and it has greatly improved our ability to assist members.”

Shasteen adds that offering kindness and patience are important when responding to members’ calls and inquiries. “We are here to listen and assist them.”

Listening to and assisting the DREMC membership is how “The People Who Power DREMC” continue to fulfill the cooperative’s 86-year mission of caring for those we serve through providing safe and reliable electric service at the lowest possible cost. 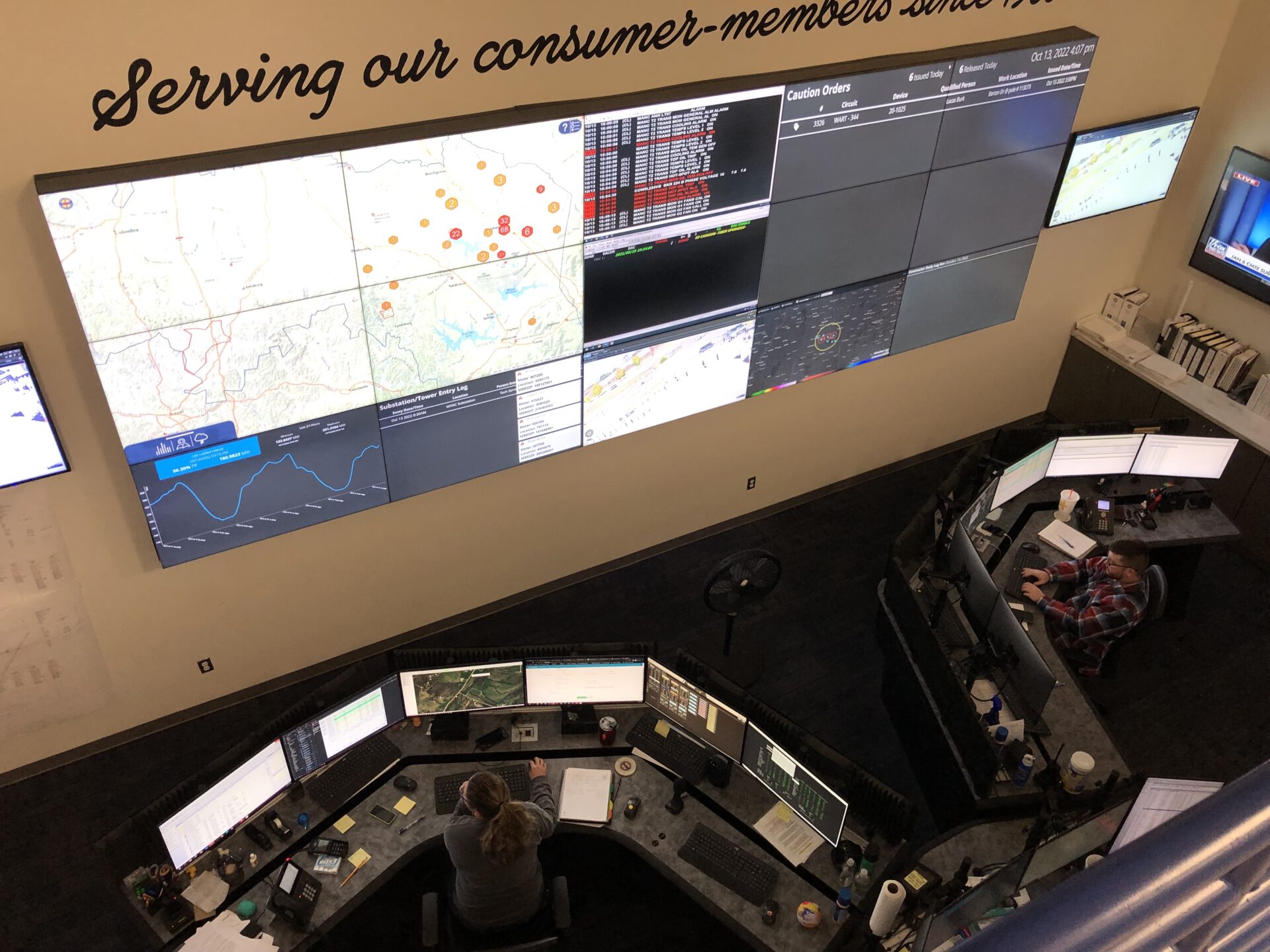