Five unopposed incumbent directors were re-elected to new terms, and board officers were named in the reorganizational session following the meeting.

Barry Cooper is the new chairman of the DREMC Board of Directors. He represents Zone 4 (Bedford and Rutherford counties). Cooper is a Shelbyville businessman who has served on the board since 2002. Other officers include Buford Jennings, vice chairman; John Moses, treasurer; and Laura Willis, secretary.

“Eighty Years of Light” was the theme of this special DREMC anniversary meeting. Speakers looked to the past and future as they marked the progress logged since a group of rural residents banded together in 1936 to start a member-owned, non-profit electric utility dedicated to “area coverage.”

State Farm Bureau President Jeff Aiken welcomed co-op members when the business session started. Tennessee is the largest state Farm Bureau in the nation, with roots going back to 1921. He noted that Farm Bureau organizations played an important role in the electrification of rural America.

“In the 1930s, when efforts started across the U.S. to launch electric cooperatives, Tennessee Farm Bureau helped groups of farmers and rural residents organize and network with the Rural Electrification Administration to get their new utilities off the ground,” said Aiken.

“Tennessee Farm Bureau has always been dedicated to lobbying for the betterment of its membership. Advocating for rural electrification was certainly in keeping with this commitment.”

“When I look out at the faces in this morning’s audience, I see owners, not customers. This is the key difference between us and other types of electricity providers. I believe it is the main reason for our strength and longevity,” said Willis.

He noted DREMC’s growth since 1936, from 460 members to today’s 73,000-plus. DREMC’s first REA loan for system construction was for $379,000. Nay-sayers and critics predicted the loan would never be paid back. They were proven wrong many times over.

“Last year, we paid more than $2.5 million in property taxes in our service area. That’s 6.5 times the amount of money borrowed from REA to start building the co-op!”

Willis added, “Today, we are the fifth largest electric cooperative in Tennessee and among the 50 largest in the nation.”

President and CEO Michael Watson in his remarks contrasted the lighting of the countryside by electric co-ops to a modern-day challenge: broadband connectivity for rural homes, farms and businesses. He said broadband is an economic development issue, just like rural electrification was in the 20th Century..

“The Duck River Board of Directors has charged me with exploring what we can do to help facilitate the expansion of broadband across our service territory,” Watson said. “It is certainly an issue affecting the quality of life of our members.”

Watson also explained DREMC’s commitment to community. He said programs like Project Help and Weatherization Wizards are ways to give back and help those in neeed.

Demand response programs like Beat the Peak™ and Conservation Voltage Reduction (CVR) benefit all co-op members by reducing the effect of peaks (highest demand for wholesale electricity), when the cost of power can skyrocket to $9.50 per kilowatt-hour, Watson pointed out.

Treasurer John Moses said DREMC is financially strong, with assets of more than $238 million and total income of more than $179 million. Revenue was down in fiscal year 2016 due to a warmer winter. Moses noted that the co-op maintains a healthy equity ratio of 42%

The cost of purchased power from TVA represented 78 cents of every dollar paid to DREMC by members in FY 2016. 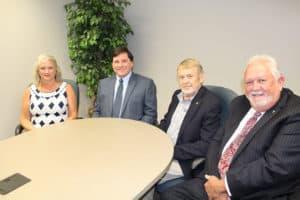 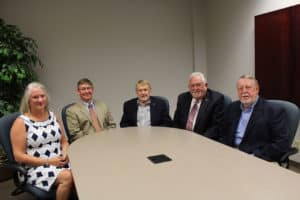