Posted at 22:57h in News by gina warren
Share 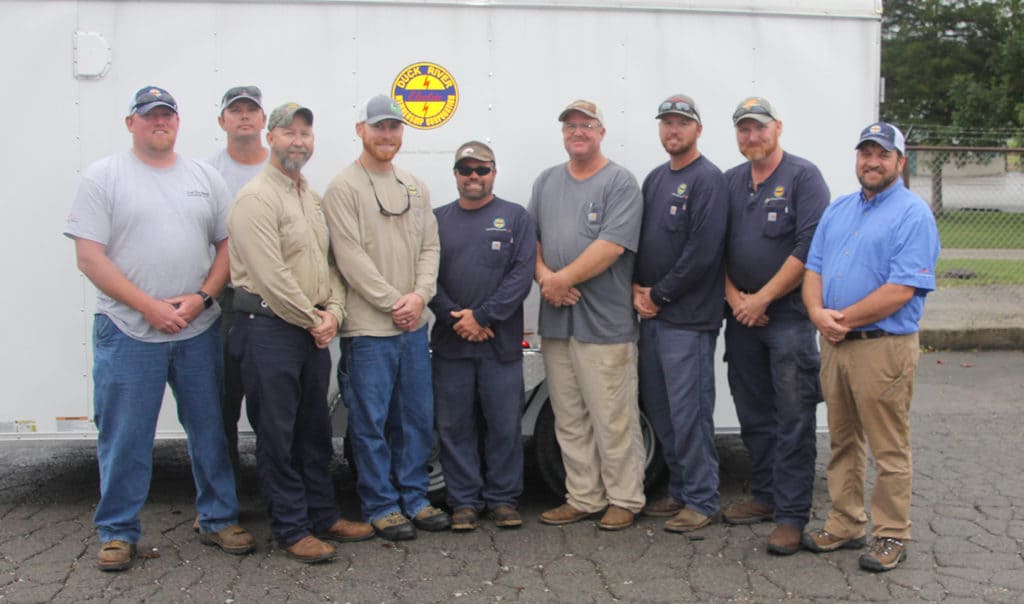 On Wednesday, Sept. 13, Duck River Electric Membership Corporation (DREMC) sent a crew of nine to assist with power restoration in parts of Georgia devastated by Tropical Storm Irma that brought 6 hours of 30 mph winds, with gusts of more than 60 mph, causing unprecedented damage and outages in every corner of the state. The Amicalola Electric Membership Corporation (AEMC) area, one of the hardest-hit areas in Georgia, reported 27,583 of their 37,367 members – that’s almost 75 percent of its members – without power.

Hurricane Irma, a Category 4 hurricane, moved through the Florida Keys Monday night with winds measuring up to 130 mph and covering the entire landmass. As it moved upwards into gulf states, the tropical-force winds, torrential downpours and the sheer size of Irma resulted in extensive damage to the electric infrastructure in three states, leaving 15 million residents in Florida alone without power at the peak of the storm.

According to the statewide Georgia Electric Membership Corporation officials, although the hurricane weakened to Tropical Storm Irma, no area in Georgia was left untouched as they collectively reported some 550,000 electric customers without power due as it swept through the state. As of 3 p.m. on Tuesday, that number had improved to approximately 347,000 remaining in the dark.

“Tennessee crews had been making plans since last week but were hesitant to commit to sending crews until the remnants of Hurricane Irma moved through Tennessee,” says DREMC CEO and President Michael Watson. “After the storm passed and arrangements were made, we were able to deploy our crews to assist.”

Director of District Services David Young adds, “We actually had twice as many linemen volunteer to help than Amicalola EMC actually needed from us.”

Young further explained that from the ones who volunteered, management chose the ones to go based on vehicles being sent and operating knowledge of those vehicles as well as spreading out the volunteers across the DREMC service area.

“We want to ensure that we are still able to respond and assist should we experience an outage at home,” remarked Young, “so we choose a couple of linemen from across our districts.”

According to officials at AEMC, Tropical Storm Irma is a historic outage event in Georgia, and it will take days to completely replace or repair power lines and power poles in every corner of the state. Unlike a summer thunderstorm, which is short-lived and localized, Hurricane Irma battered the entire electric cooperative service territories for hours upon hours. For that reason, restoration will span several days, and some members may be without power through the weekend as crews work together to restore power as quickly and safely as possible.

Nearly 100 line workers from 12 electric cooperatives in Tennessee have been sent to Florida and Georgia to restore power to those affected by Hurricane Irma.

Young further stated that DREMC linemen will assist AEMC with power restoration as long as they are needed, but if the duration of their stay exceeds 10 days, DREMC plans to bring them home and send a new crew of volunteers.

“We appreciate our linemen volunteering to be a part of this effort, and we pray for their safety as they work to help restore power in the dangerous conditions of storm-hit areas of Georgia,” Young said. 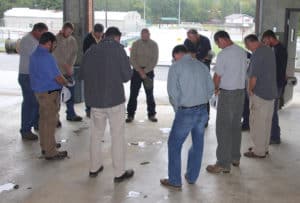 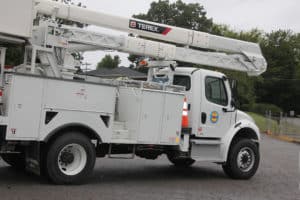